KarbonKountyMoos has turned me on to Flickr and I have to admit it, I'm an addict. She says there isn't a 12 step program for it, so I'm doomed. I have spent countless hours uploading my pictures and haven't made much time for blogging. Add that to working about 60 hours a week, and it doesn't leave much time for anything, but life is good!

I took this picture of the weird weather today: 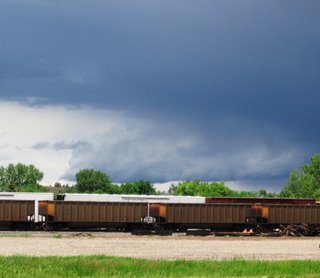 Below is a picture of the Yellowstone River. It is pretty high right now. The ripply part is the irrigation diversion dam. You can usually walk on it. I don't think I'd try it now. 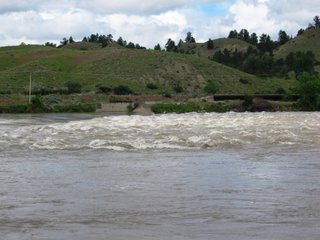 I also took this picture of a squirrel at the park. It didn't seem at all concerned that the Yellowstone was flooding. 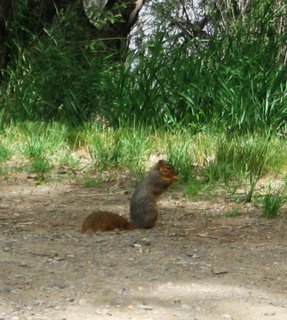 Design on a dime 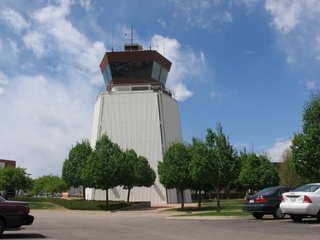 I just returned from helping my son move into his new apartment. He had been sharing an apartment with a very nice couple, but it was time to get his own space. He spent many days looking at apartments near the area where he works and for a variety of reasons, chose the Sandalwood Apartments in Broomfield, CO. The price was right, the neighborhood was nice, and the manager was a sweetheart. All together a win-win! I posted the picture above because that is where I ended up when I tried to follow map quest to my son's new address. I found myself at the Jefferson County (aka Jeff-co) Airport, which has been renamed the Mom-co Airport (LOL). 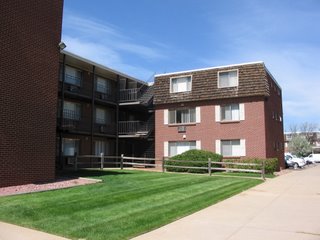 The building is older, but very well maintained. The people in the building seem really nice and very friendly, which is always a good thing. The laundry room is nice and clean and the dryers run forever on a dollar which will be very good on laundry day! 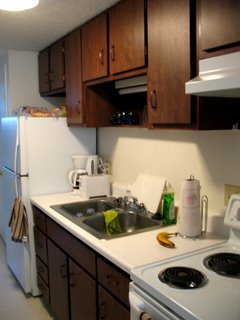 The kitchen is small but cute and has all new appliances including a disposal. We got some real bargains on small applicances at Target and the thrift shops in the area. We stocked his huge pantry with items from Costco and Kings Super. He will have enough food to last him for quite awhile and all at his fingertips! It's good to be the mom! 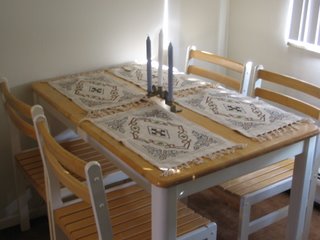 We found this cool dining room table in Boulder, added a set of placemats from Ross and a candelabra we picked up at an arc store and voila', he's ready to invite his friends over for a meal. 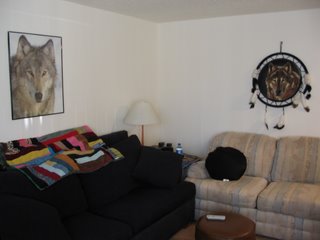 We purchased the blue couch in Boulder for a very fair price, but he still needed more seating for his weekly card game. We looked all over for something to fill the space and hadn't found anything by the time we took the U-Haul back. We figured it would have to wait for another time. Then I happened to be hauling garbage out and noticed a nice, extremely clean loveseat by the dumpster. Of course my son was thrilled, so we lugged it up the steps and it fit like a glove. I guess one person's trash truly is another person's treasure! Thank you, whoever left it there for us! 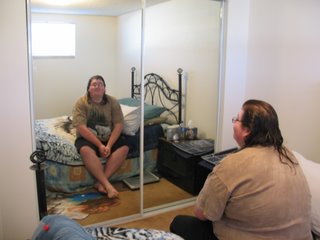 We got the bedroom mostly put together and Nels took a break. The closet doors are mirrored, so it really makes the room look big! He sure looks happy doesn't he? 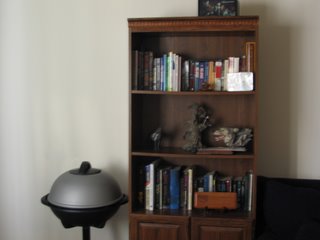 We found this shelving unit and one just like it at a church rummage sale. We also bought 2 lamps and a plant there. Total bill=$26.00! The people that sold it were so nice! They offered to haul it over to the apartment for us! Even though Broomfield is in the big city, it really has a small town feel to it. We bought the grill at Costco. It's an electric George Foreman grill, and it works great! 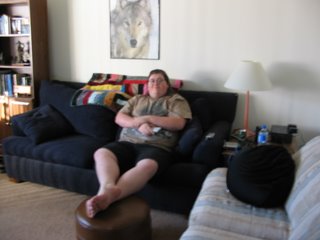 A man and his castle! I took this picture the morning I left to come back home. Sure is good to see my son relaxing in his new space.
Posted by dmmgmfm at 1:44 PM 5 comments: