Exactly what I needed...

Lately I've been feeling extremely frazzled. So much to do, so little time to do it in. Work has been beyond hectic and so has life.

Technology has taken over; the computers and printers, fax and copy machines...I can never seem to get away from them. And the worst, it seems, are the phones. We have 10 phone lines in our office and some days the ringing doesn't stop and people call my cell phone for work as well.

No matter where I go, it seems, they find me. I sometimes find myself thinking...if that d*mn phone rings one more time, I am going to toss it out the window!

Luckily, just as I was reaching the breaking point (OK, some might say I was already there), a friend asked me to ride to Denver with her.

I packed lightly (for me), picked up my kid-cousin Sadie (age 9--almost ten) at our house in Billings, met my friend at the Holiday Inn and headed for the big city lights in her rental car.

We had a few misadventures along the way...can you say a four hour wait for Enterprise to decide to replace the two completely bald tires (one of which was completely flat on BOTH sides--heehee) on our rental vehicle in Sheridan, WY...and arrived in Denver around 9 pm. Off to a late dinner we went and then to bed to get ready for a fantastic weekend!

As always, Wolf had great adventures planned. The first stop on our whirlwind weekend tour was Central City, CO, well known for its gambling halls and fancy hotels and less well known for its incredible scenery and amazing cemeteries.

My son has always, as my mom used to say, paddled his own canoe. His idea of an adventure is not to sit in a smoky casino, it is to explore the great outdoors.

In one of his many adventures he found these two very old, very rustic side-by-side cemeteries and thought we would enjoy seeing them as well. 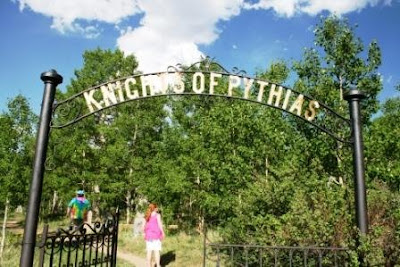 Here Sadie and Wolf head up the path to the cemetery. It was ungroomed and unkept, for the most part, and incredibly large. I am no judge of acreage, but I'd have to say it covered several square miles. 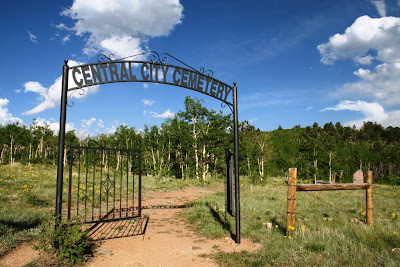 There was no way to take a photo that would truly represent how much area the two cemeteries covered. 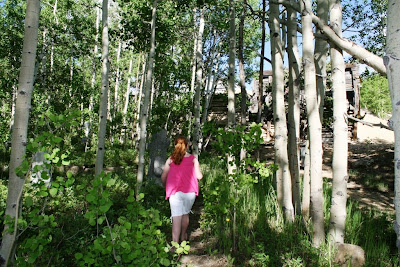 I was surprised by how much enthusiasm Sadie showed during the trip, although she adores Wolf so much, she'd probably have had fun doing anything with him. 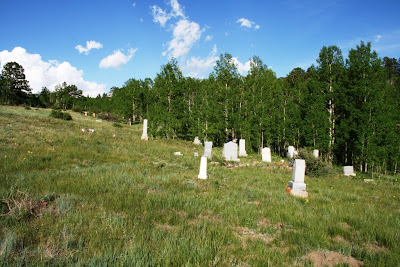 This is a very small part of the cemetery. It extends into the grove of Quaking Aspens to the right and to the left as well. 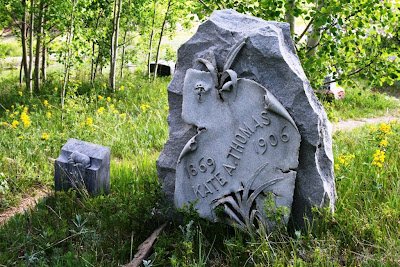 This is one of the many unusual headstones we saw. 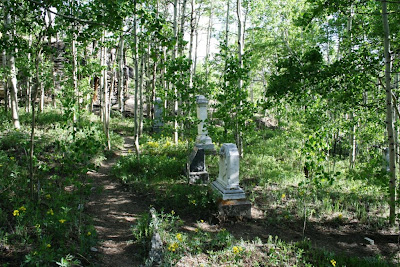 The trail extended for what seemed like miles. We walked for nearly an hour and a half and didn't come to the end of the property. 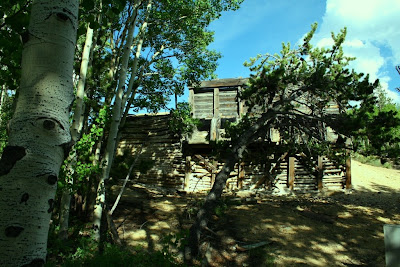 This old mine building was roped off, but we thought it was quite interesting. Sadie wanted to go exploring, but Wolf told her it was dangerous so she stayed away. 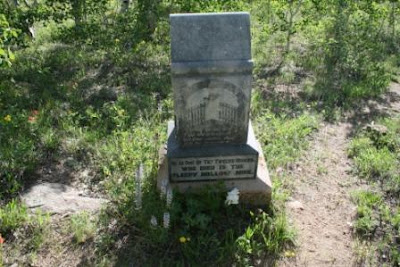 This monument was to one of twelve miners who died in the Sleepy Hollow mine disaster in 1895.

This is a close-up of the bottom of the stone. 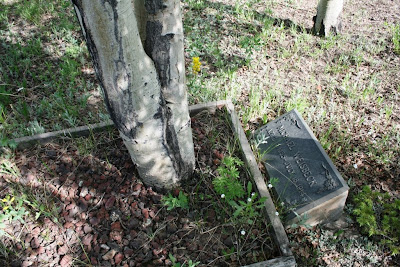 I thought this was interesting for some reason. Life coming out of death or something like that... 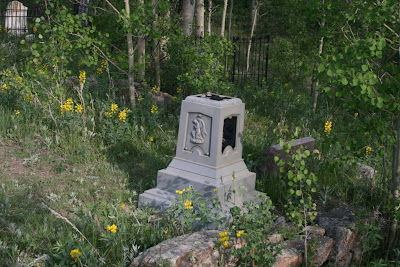 I loved the way the stone looked with the flowers around it. 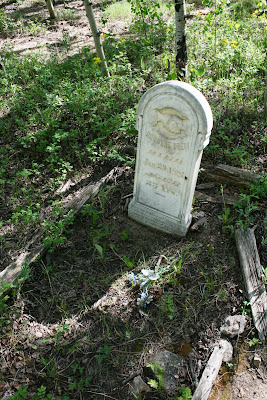 The saying on the bottom of this stone really touched me... 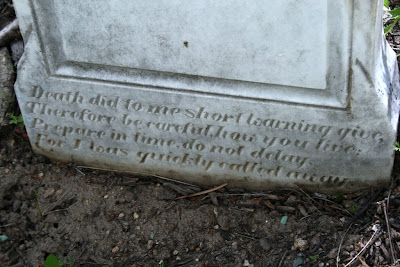 How incredibly true, don't you think? 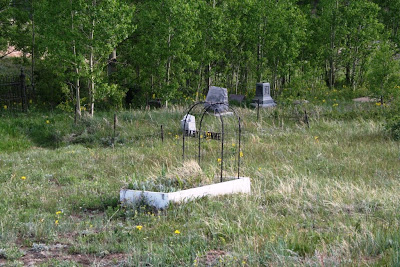 The graves of young children brought tears to our eyes, especially Sadie. 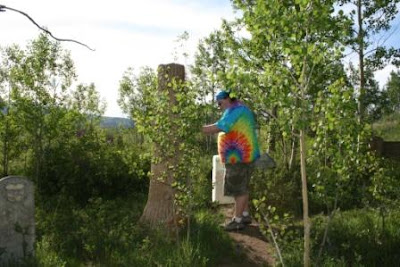 Nels found an unusual headstone. I thought it was a tree when I saw it from a distance. 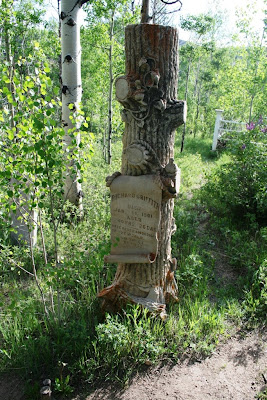 When you think about the tools they had to work with back then, these stones are even more remarkable in my opinion. 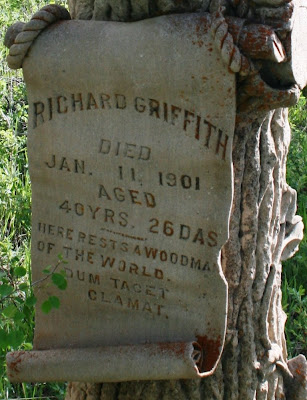 I think this is beautiful. 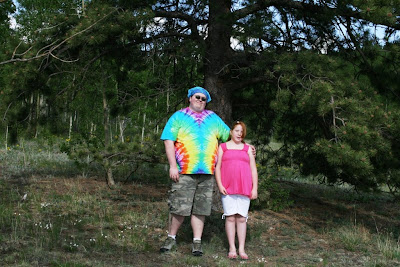 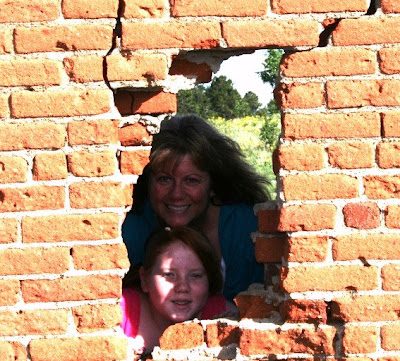 Sadie and I found an old building that had only one wall remaining. Wolf decided he needed to take a picture of us. 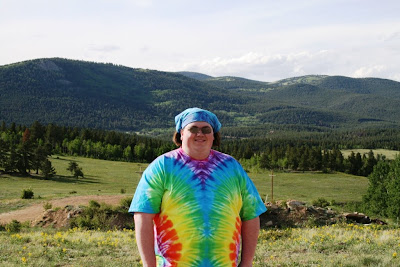 Wolf as we were getting ready to leave the cemetery. I told him when I died I wanted to be cremated and have some of my ashes spread here. I can't imagine anywhere more beautiful. 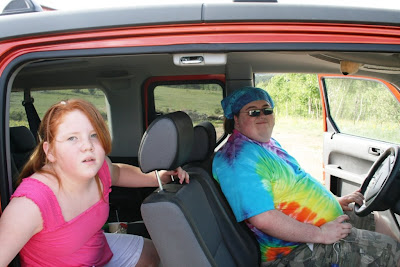 I really want to thank Wolf for this part of the adventure. All of it was amazing and wonderful and enjoyable, but getting me away from civilization and back to the past for a few hours was exactly what I needed.
Posted by dmmgmfm at 4:12 PM 13 comments:

My son is one of the most giving people I know. He works hard, volunteers for various causes and is always there to lend a hand to his friends and family. He is kind and sweet and generous to a fault and I feel truly lucky to be his mom.

What has he done now, you ask? For the third time in as many years, he has cut all his hair off and donated it to "Locks of Love".

This is the picture he took of himself as he was preparing to leave the hair salon. 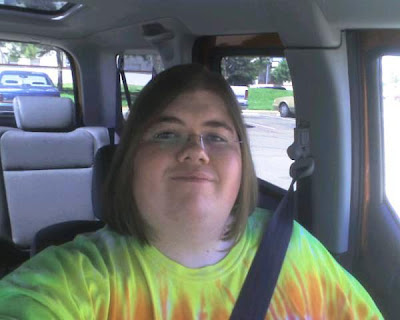 I could not be more proud of him than I am right now.