I had a full-fledged rant ready to post, but I am going to spare you, and instead just ask you a question.

What would you do if someone in your family was very, very sick and their family was in denial or just didn't want to take time out of their "busy" lives to do something about it.

N, has surgery for something her brother (and best friend) J had surgery for (and died from), less than a month before. In the course of her recovery, N becomes depressed and increasingly incoherant. Partly because she is grieving for J and partly because she has had to move out of the apartment she has lived in for 25 years and into a residential care facility.

The course of her depression leads her to develop what her caretakers believe to be bulimia or something very similar. The condition goes on for nearly 2 months and N is literally starving to death and getting more and more confused as the days progress. There is nothing else physically wrong with N, she just throws up everything she eats (and has been observed sticking her finger down her throat).

If you were someone who had visited N twice a day during this time and had witnessed her illness progressing, would you contact the immediate family and suggest that they call in psychiatric help?

As you may have guessed, I did that very thing and was told by the family spokeswoman that N was just fine, that her only remaining brother, also N, had been to see her on a regular basis and had said that she was eating and coherant enough to make he own medical decisions. She made it very clear that my input was unwelcome.

To me it seemed that they were willing to just let her die without fighting to help her get well.

It seemed her doctor felt as I did, he saw her this morning and immediately admitted her to the hospital.

Since I seem to be having more and more of these every day, I thought I would share something I got in an email today. You've probably seen it before, but I think it bares repeating. 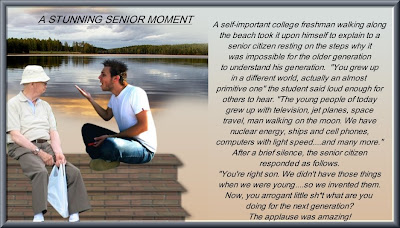 I'm not a big fan of eating meals out...it is expensive and generally high in calories, fat, salt and all of the other things that can be avoided when you cook at home.

Since I moved back, I have been doing most of the cooking. My brother works long days or nights and my day is pretty long as well.

When we get home (him at 6:30 in the morning or evening depending upon whether he is on a 12 hour day or night shift, and me at 8 or 9PM), neither one of us has much interest in putting together a dinner meal, let alone deciding what to make for lunch the next day.

What Mike did in the past, was spend most of one day of the weekend cooking everything he needed for the work week. I have carried on that tradition because it works well and it is kind of fun. I put on my favorite tie-dyed shirt, my purple apron, my pink, purple, black and red (I am such a fashion plate) pajama pants with the penguins on them and my big fuzzy multi-colored slippers and start cooking.

Today's fare included a massive potato salad (with red peppers because my brother bought a Costco bag of them and didn't want any of them to go to waste), a gigantic bowl of beef fajitas with fresh mushrooms, red peppers, onions and a tiny bit of sauteed garlic, country potatoes, again with fresh mushrooms, peppers, onion and to add some zest and protein, country style bacon bought from our local meat packing plant a bowl of steamed, glazed carrots and finally a large tuna salad.

I put fresh carrot slices, grapes and triscuits into baggies (no, not all in the same baggy, that would just be gross) and packaged up oatmeal and blueberries for the morning. I accomplished all of this in just under 5 hours and not once did I set off a smoke detector.

Now if neither Mike nor I have to go to the ER during the week for food poisoning, I will consider my cooking day a success.

So tell me, how do you handle meals and meal planning at your household?
Posted by dmmgmfm at 5:37 PM 15 comments:

Two of the men that sit with dad at meals are developmentally disabled. Danny and Phil are wonderful guys and my brother and I consider them family. Two of Danny and Phil's favorite things are parties and birthdays. How convenient that the two go so well together!

A month or so ago, I was feeding dad lunch and Danny asked when my brother's birthday was. I told him it was coming up and that he would be 55. Danny said (and Phil agreed immediately) that we (meaning me) should put on a birthday party at the nursing home for him.

I thought about it for a few minutes and agreed, adding that I thought it ought to be a "surprise" party because I knew that Mike would not let us make a fuss over him if he knew about it.
For weeks we plotted and planned. I had serious doubts that we would pull it off as a surprise, since after all, the people doing the planning (including and possibly most noticeably, me) were in various stages of senility.
As time drew nearer, I went around to the staff and residents to invite them all the the event, which was to be held at 3PM on Sunday, February 1. A gigantic cake was ordered and ice cream purchased. Napkins and plates, banners and presents were aquired and still Mike had no clue what was going on.

The plans were finalized the morning of the big day. Cousin Kay and the kidcousins were bringing the ice cream and picking up the cake. It was my job to deliver Mike to the nursing home by 3, WITHOUT him realizing that something was afoot.

It was a beautiful morning. The sun was shining, the coffee was delicious as was the breakfast I managed not to burn. We puttered about, doting on the animals, doing some laundry and paperwork.

I had already told Mike that our friend Joyce was going to be at the nursing home for the Super Bowl party that afternoon and he had agreed to meet her there to show her some school photos that we had found in Uncle John's house when we were cleaning it out.

Around 2:15 we were ready to leave Absarokee and drive the 14 miles to Columbus to the nursing home. Cousin Kay and I were discretely text messaging back and forth as Mike drove toward out destination. Kay had accidently left her purse in a restroom in Billings and had gone back to retrieve it, but was once again on her way to set things up for the party.

HOUSTON, WE HAVE A PROBLEM
About half way to Columbus Mike suggested we walk his dog at her favorite fishing access along the Stillwater River. Not being able to come up with a plausible reason why not to, I said (grudgingly) "Sure".

Mike rambled on and on about a huge tree he had seen on his last visit. It had fallen across a large rock at the end of the footpath and he wanted to get a photo or two of it. 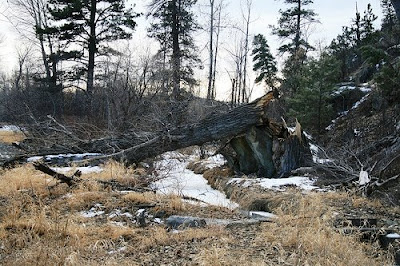 When we got to the end of the trail, I had to admit to myself that it was quite a sight and well worth being a few minutes late to the party. 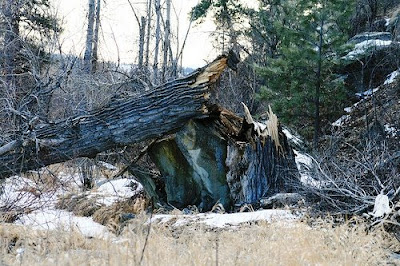 As usual when I am outside, the time slipped away from me. We walked and admired the beauty of the Stillwater River. 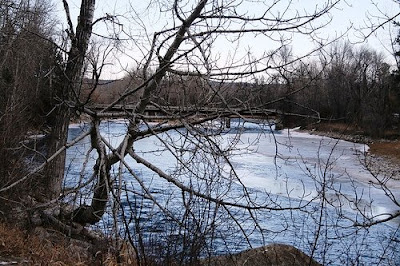 Shasta, in all her glory, frolicked along the river's edge... 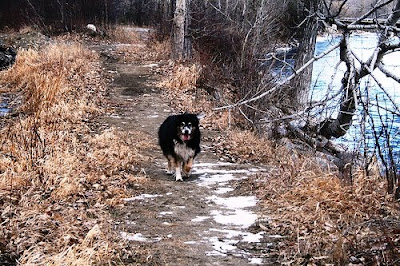 I, obviously, took some pictures and Mike did too... 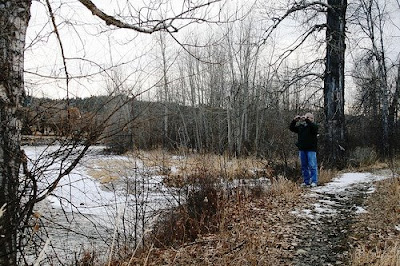 Shasta found something to roll in on the ice and we laughed at her exhuberance... 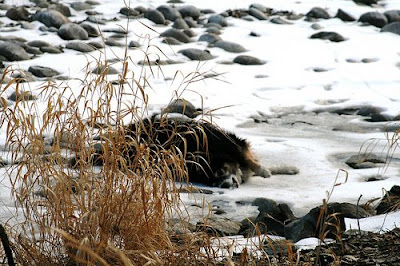 We finally got a little chilly and began walking back to the car. 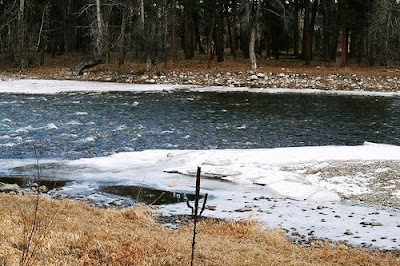 I was relieved, to say the least, when I got back to the car and saw a text message from Kay saying that she and the kidcousins had arrived at the nursing home and the party was set up and ready for our arrival.

I sent her a quick text telling her we had been way-layed and would be there in 15 or 20 minutes, so imagine my dismay when Mike suggested we take his car to the carwash before going to see dad.

I hid my frustration well, however, so well in fact, that after we washed the car (you should have seen me spraying and barking orders at Mike...it was quite comical and by the end of it both Mike and I were drenched), we stopped at the grocery store for bread and milk.
We finally arrived at the nursing home, only 45 minutes late and one of the nurses sent Mike to the dining hall in search of Gramp. Imagine the look on his face when he saw 40 or so people and this.... 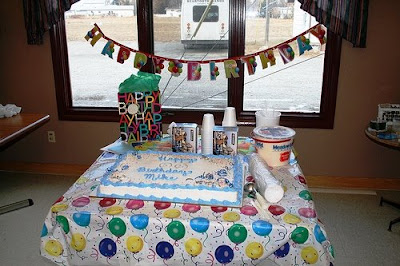 Yes, folks, he was surprised! 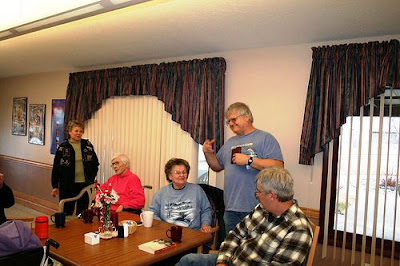 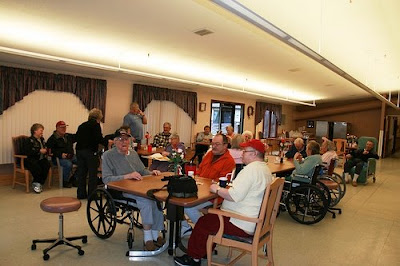 Especially THESE GUYS (from clockwise; Gramp, Phil and Danny)! 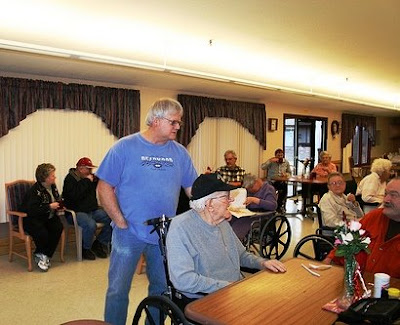