Dad is settling in very well. He says he is very happy. He has good friends living at the nursing home and he is feeling better every day. He is getting a lot of exercise, which he didn't get enough of at home and the social interaction is very good for him. His 84th birthday is this Saturday and we are having a birthday party for him at the facility. I've put an ad in the county newspaper letting people know that he is living there and asking them to join us for the celebration.

Ur-spo suggested that I give my fellow bloggers the opportunity to send him cards and letters. I think it's a wonderful idea, since getting mail is a real treat for him, so here's the address:

My brother goes to see him every day after work and a lot of his friends have stopped by as well. We can bring the dog in to visit and he can go out for rides and home for visits. I am truly amazed by how well it has gone, but it took a lot of planning and a lot of time to put it all together. This is the busiest time of year for me work-wise (hence the wild ride) and so now I'm scrambling to catch up. 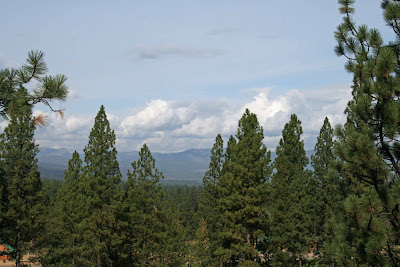 The view from our room at Seeley... 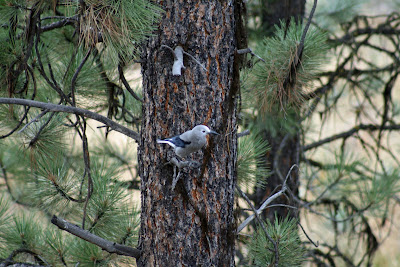 One of the many birds I was. I have no clue what it is...any ideas? 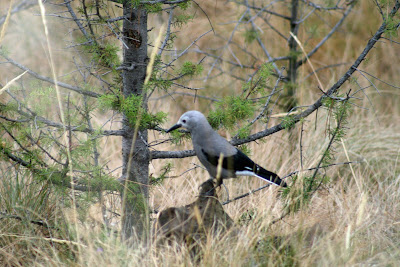 I think this is the same bird... 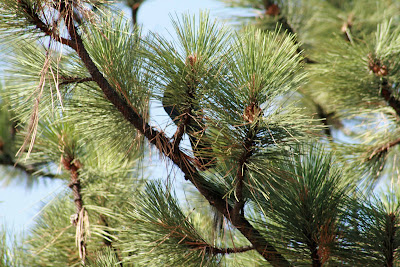 This is a stellar's jay. I tried and tried to get a decent picture of him, but I guess he was shy...

The photos, above, were taken at a watershed group training session in last week. It was a 481 mile trip one-way and we drove up on Monday and drove back on Wednesday. We left the training around 4 pm and took a wrong turn (imagine that!!) and ended up going over McDonald Pass to Helena rather than hitting the interstate near Butte. It added about 100 miles to the trip, but it was well worth it; as we were going down the pass a pair of baby bobcats ran across the highway, chasing after their mother. They were the cutest thing I have ever seen!

I wasn't able to take a picture of them, but stopped immediately after and took this shot of the downside of the pass. 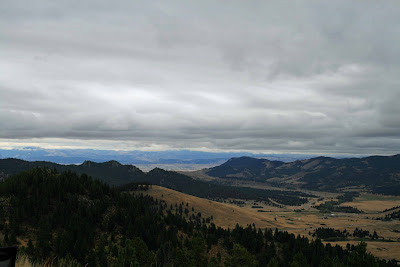 We stayed in Wednesday night (where dad is now) and visited with him Wed. night and Thursday morning for several hours. It was great seeing him doing so well, but emotionally pretty exhausting. By Friday I was totally spent.

I have been working all weekend to get ready for a huge meeting that will be attended by people from all of the state. I am holding it at a tiny town 44 miles from Forsyth, at a bar/restaurant that doesn't even have indoor bathrooms! I want everyone to see my area, and I couldn't think of a better place for them to visit.

We are all staying at a place called the "Bunk and Biscuit" which is really nothing more than an old schoolhouse that has beds and bathrooms in it. It is mostly used by hunters, so it should be interesting to say the least. We are having buffalo meat, the Jersey Lilly's famous beans and sheepherder's hors d'oeuvres. The theme of the meeting is "Boots and Blue Jeans Required". I am looking forward to it, but I've been working 12-16 hours a day to prepare for it. When it's over I intend to have a breakdown of some sort! Ha!!

Does anyone know where I can buy the book Feng Shui for Dummies?

After a long, emotional, exhausting week, dad has been moved into the nursing home. He is somewhat confused and disoriented, but I think that he will eventually adjust to his new living environment.

Mike and I spent a lot of time and money trying to make his room as homey as possible. I am not at all domestic, so I was quite out of my league, but I gave it my best shot.

This is the room he was assigned. 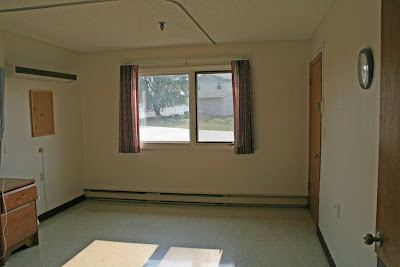 A little retail therapy was in order... 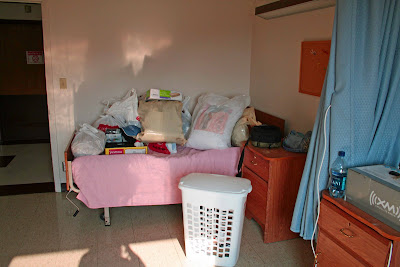 The new adjustable temperpedic mattress and the dresser we bought for the room. 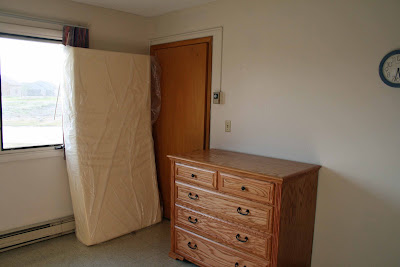 A good friend of mine is a CNA in his wing. I know she will take extra good care of him. 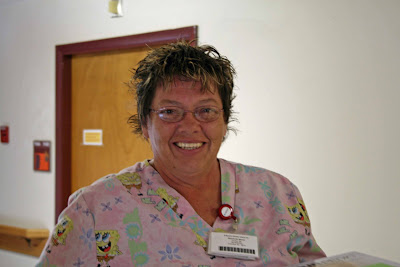 I spent all day Wednesday working on the room. The furniture was delivered and set up and I organized it to the best of my ability. I filled the drawers and closet with dad's favorite things and all of the new things we bought. 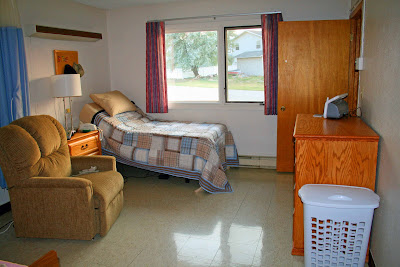 I took this picture in late afternoon. I was standing in front of daddy's window. The clouds in the distance hide a great view of the mountains and the Yellowstone River is just across the road from the facility. 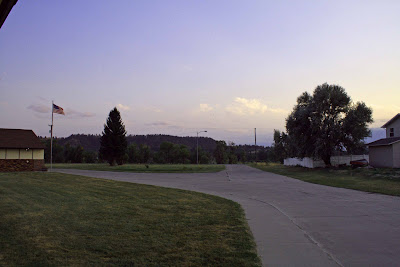 This is what I saw out dad's window as I prepared to leave for the night. 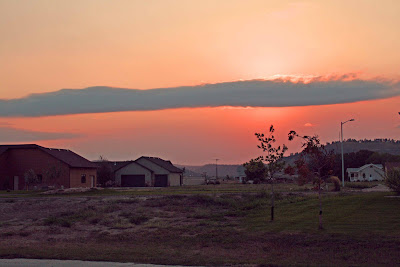 The next day, the new Sony flat panel TV was delivered. 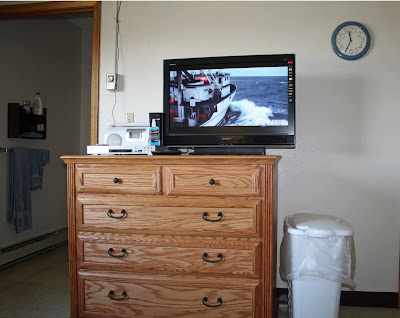 The first evening in his new digs. 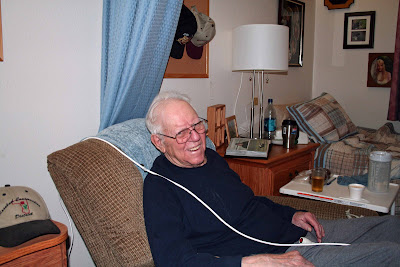 This sunset greeted daddy as he prepared to spend his first night away from home in 48 years. I believe it is a sign of beautiful things to come. 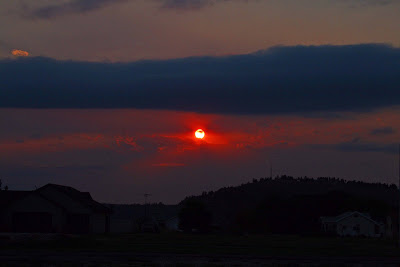 The next great adventure 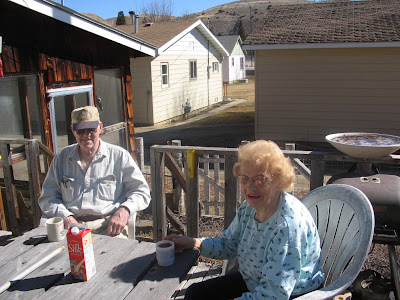 Dad and Lois, sunning on the deck.

I'm spending the week with my dad in Absarokee. It has become apparent to everyone around him that he cannot stay alone any longer. We all talked it over and it was decided that he will move into the nursing home in Columbus, Montana.
Mike, my brother, works in Columbus and dad will only be 14 miles from home. We will bring him back as often as possible and also visit him at every opportunity. He has friends living in the same facility, so we are hopeful that the move will be a positive one for him.

Mike and I spent several afternoons in Billings buying items dad will need for his stay. We also visited Lois (pictured above with dad) his next door neighbor who has been in the hospital for a couple of weeks. She has been very ill, but she is on the mend now.

I will spend this week helping dad pack and prepare to move in. Most of his new things will be delivered on Wednesday and I will organize and decorate his space then. He will move in on Thursday.

We are doing our best to make it a wonderful adventure for dad, so if you have any suggestions, please pass them along. We want this to be fun for him, he is a wonderful man and he deserves the best.
Posted by dmmgmfm at 9:10 PM 32 comments:

A friend of mine has a request. Her children's school is requesting soil from all fifty states. They will be using it for a wide variety of school projects and it sounds like a really good learning experience for the children. I am sending soil from Montana, along with some conservation literature and information about this fine state.

I hope that some of you will volunteer to collect one cup of soil from your lawn and put it in a baggy. Mark the name of the state on the baggy and send it to:

There's no need to include any other information on the baggy, just put it in an envelope or box and mail it off. Wouldn't it be something if between us all we could make this happen for the children?

And now, as promised, here are some pictures from my Yellowstone River tour. 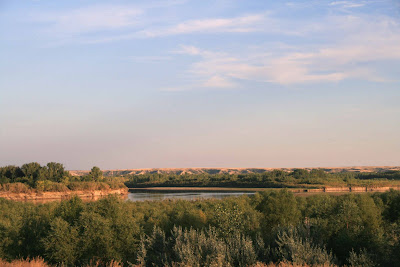 The confluence of the Yellowstone and Missouri Rivers 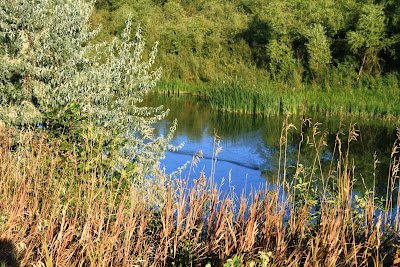 I otter have had my camera at the ready...I'd have gotten a better shot of this lutra canadensis. 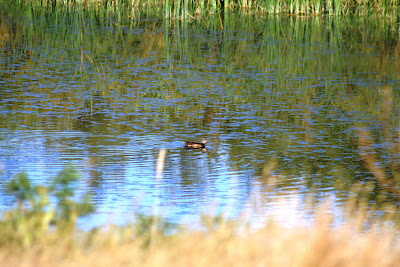 Everything is just ducky... 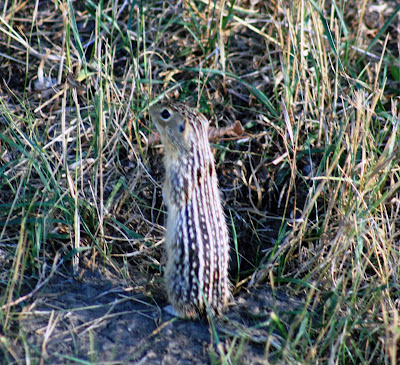 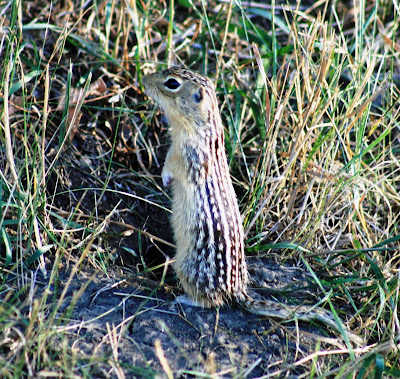 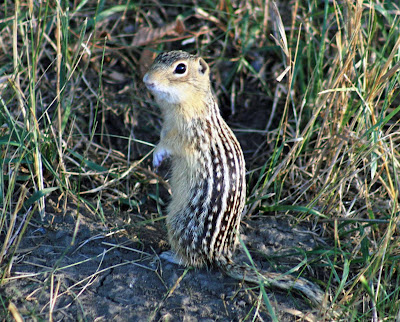 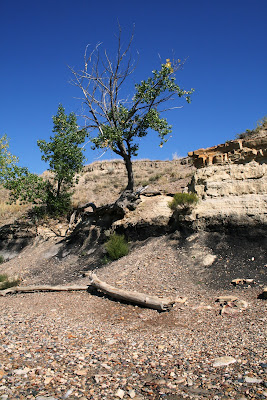 This week I spent a couple of days touring the lower portion of theYellowstone River with a group of conservationists who are trying to determine the best way to manage this incredible resource.

The Yellowstone is an amazing river; it is over 670 miles long which makes it the longest free flowing river in the lower 48 states. Originating in Yellowstone National Park, it drains over 70,000 miles of land before it reaches the Missouri River.
It is also home to the Pallid Sturgeon. This armor plated, bewhiskered relic of the Jurassic Era, is native to the Yellowstone, Missouri and Mississippi Rivers, but its stronghold, if you can call it that, is in eastern Montana and western North Dakota. Pallids grow up to 5 foot long and can weigh up to 60 pounds. Fish biologists believe that there are fewer than 200 Pallids left in existance and that most of the fertile females were teenagers during the Eisenhower administration.

Listed as an endangered species in 1990, conservationists have been scrambling to determine why the population of Pallids is dwindling so rapidly. What they have determined is that various irrigation structures placed in the rivers have made it impossible for the Pallids to reach vital spawning grounds in the Yellowstone River.
The group that I traveled with is committed to finding a solution to this problem.
Our first stop was at Intake, near Sidney, MT. Intake is an irrigation diversion on the Yellowstone River. It provides irrigation water for farmers in eastern Montana and part of North Dakota. This structure provides irrigation to 52, 133 acres of land via a 71.6 mile canal. It is also one of the problematic structures blocking the Pallids from their spawning grounds. At this stop we listened to the US Army Corp of Engineers and various other government entities discuss potential solutions to this problem.
Below are some photos I took during this fun filled, but educational day 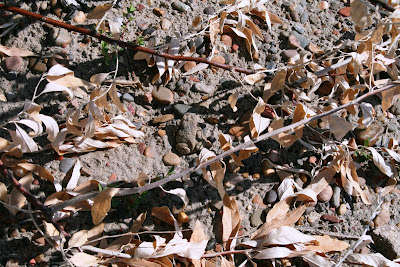 Do you see him hidden in there? 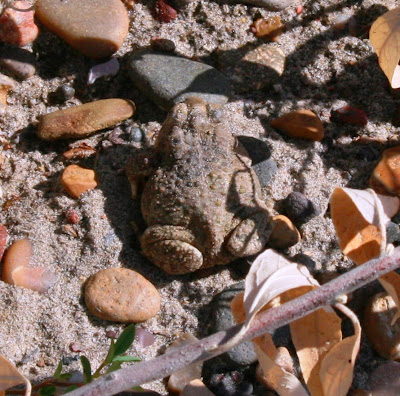 Here's a cropped picture of the little feller. 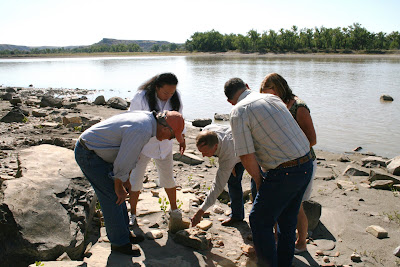 What's everybody lookin' at? 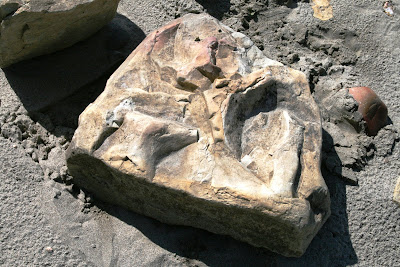 A shark's tooth embedded in a rock! 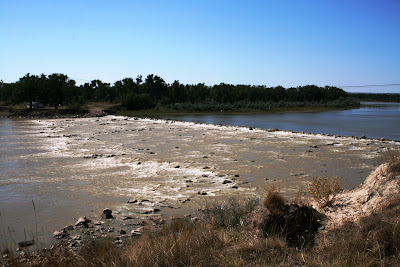 This photo is of the irrigation diversion. 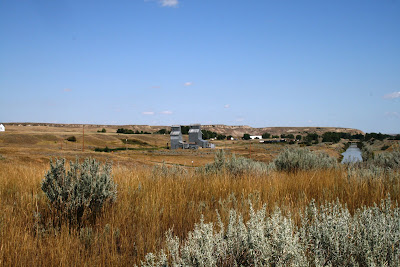 I climbed up on top of a bluff to get a work photo and noticed that the view to the north was rather beautiful, so I took a shot of it too.

Tomorrow or Monday I'll post more pictures from the trip. Until then I'll leave you with a picture of the sunset I had the pleasure to witness on Thursday night. 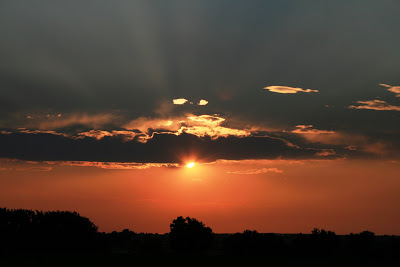