I Must Hurry and Catch Up to Them, For I Am Their Leader

I started to write this Wednesday night. Things have been hectic here, to say the least, so the blog has been put on the back burner. I finally have a few spare minutes to finish it up, but don’t expect too much.
We arrived in Denver without incident, but not for the lack of trying. But was it really without incident? I guess it would depend upon how you define the word. Wiktionary defines it as "a designed, sudden, and unfortunate event", and I can promise you that most of what happened yesterday was not designed. Some of it, however, was sudden and some might even think, unfortunate.

The adventure began at 4:00 am on Wednesday morning, when I staggered crawled out of bed to shower and load the car for the trip to Denver. Despite having gone to bed just a few hours before, I was looking forward to the day because it meant that I would be spending time with two of my favorite people; my cousins Kay (who has just started a blog that you MUST check out) and Dale.

After numerous trips in and out of the house, the car was loaded and I was ready to go. It was 5:00 am. The plan (which had finally been revealed to me around 11 pm the night before) was for me to meet Kay, Dale and Dale's brother Danny in a town around 80 miles from home. From there we would "convoy" to Denver; Dale and Danny in one car and Kay and I in the other.

Since Kay and I been to Denver many times before and neither Danny or Dale had driven the route, it was decided that Kay and I would take the lead and the boys would follow. Danny would do the driving so that Dale could relax in anticipation of his upcoming bone marrow transplant.

Previous posts have made mention of the fact that I am Norwegian. This set of cousins are also Norwegian, and as I told a good friend a few days ago, Norwegians are notoriously directionally impaired. Leif Erickson was looking for the Spice Islands when he discovered America and the fruit doesn’t fall far from the tree, at least not in this case.

We left Hardin and headed down I-90 toward Buffalo, WY. Kay and I had the music cranked and were talking and laughing. I checked the rear-view mirror frequently to be sure the cousins were behind us. We blazed by Sheridan and headed for Denver.

About an hour later, Kay announced that she needed to “rest”. I called Cousin Danny on the cell and arranged to take a short pit stop and gas up at Casper.

As we neared town, I said, out loud, “Are you sure this is Casper?” Kay assured me that it was. We missed the first couple of exits (don’t ask) and realized we were running out of “town”, so we pulled in to the last exit and headed back towards “Casper”. We fueled and grabbed some coffee and headed back toward the highway.

We hit the off-ramp and headed toward Denver. Or so we thought. The first highway sign we came to said “Moorcroft 15 miles”. Moorcroft I thought to myself. MOORCROFT? My mind reeled. I didn’t remember passing by Moorcroft on my way to Denver in August of ‘06. Was this a new city? Had it sprung up in the months since I’d last traveled to Denver? Obviously I was grasping at mental straws…

With my poor confused cousin Danny following behind, I took the next available exit and headed back the way we came. As we neared the city I spotted a sign that said “Welcome to Gillette”.

Somehow, about a hundred miles back, I had missed a Y in the road. Instead of being close to Colorado, we were actually nearly in South Dakota. For those of you not familiar with the geography of my part of the US…going from Montana to Denver through South Dakota is not a short cut. We were seriously off course.

Kay and Dale and I laughed hysterically, but to put it mildly, Cousin Danny was not amused. 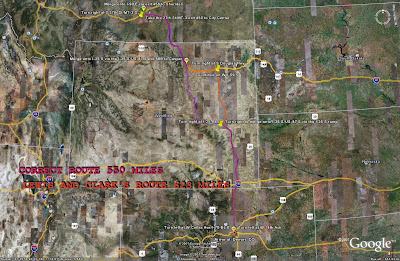 And by the way, today is my one year blogversary. I'd have never imagined, just a year ago, that my little adventure in blogging would give me so much pleasure and introduce me to all of you. I feel truly blessed to be a part of this wonderful community.

Happy Anniversary you fearless explorer you!

Congrats on the one-year Blogaversary, wish I could be with you to party.

I haven't reached that stage yet, I'm just a blogger babe in arms...

Sounds like it's a miracle you made it to the Rocky Mountain High...but can you get back home?

Look on the bright side, that Y is easy to miss (that's how we almost ended up in CO on our way up here -- or so Dan tells me), and Moorcroft is better than Lesscroft, and much better than Ashcroft.

Cuppa, thank you! I'm not sure I'm exactly fearless, though...

C'mon down for the party! We'd love to show you sights in Denver!

I'm not sure I can make it back to Montana. I might make a wrong turn and end up in *Gasp* Canada or something...

Courtney, I'm so glad to hear that I'm not the only one to miss that Y. WW, are you taking notes on this?

I await the next installment. Did you take 16 from Moorcroft and then 85? (Yes, I admit that I had to study Google Maps.)

Ooops, that me, AC, signed in as Cuppa. Don't make me explain.

Hey, Laurie, you're not alone. I don't have a drop of Norwegian in me but I get so turned around that I can't even find my car on parking lots most of the time! I'm glad you arrived safely.

Congratulations on your one year blogaversary. I only have five months behind me and hope I'm still enjoying it next October.

It's been such a pleasure knowing you! You have a fantastic blog and I look forward to checking in every day.

Cuppa a.k.a. AC, I have done that several times when using my brother's computer. No need to explain.

To answer your question, we determined our mistake before reaching Moorcroft, so we went back to Gillette and cut across to Douglas. Nice job on the googling though. :)

Mary, I do that all the time, and worse! After we finally made it to my son's house Wednesday, he took us out to dinner. I used the rest room and actually took a wrong turn coming out of the ladies and ended up in the restaurant kitchen. Talk about directionally impaired.

Oh the joys of travel!

Happy anniversary to you - glad to have found your blog.

Oh, Laurie! Did you just take that detour to make the rest of us navigationally impaired people feel better?!
I'll be thinking of you and your cousins as your journey to help Dale begins. I keep thinking how lucky he is to have you and his sibs as traveling companions. I hope you'll be posting picture1s. Good luck.
Happy Blogaversary!

Laura, I'm glad I found your blog too. Thanks!

Cathy, thank you so much. It's a trying time, but we are meeting it with humor and good energy and I know he will be okay!

It does sound like quite an adventure! You gotta watch those "Y's" in the road. At least Kermit the Frog thought so.

Sounds like a good time. Just say you're taking the scenic route. :)

Nick, so GOOD to see you here! I'll try to keep an eye on the Y from now on!

My art blog, good idea, I'll do that next time (and trust me, there will be a next time).

It has been great "meeting" you!

Are you sure you were free of intoxicants? You do know that we could apply the scientific experiment if there are any questions about it.

I did a similar thing once on a motorcycle trip to Santa Fe when leaving Durango. When I realized I was in Silverton, CO I didn't laugh. That was ugly.

congratulations on the birthday!
may there be many more years indeed.

Oh Lord, been there, done that! I hope the scenery was nice.

Happy Anniversary! I have to check, I hadn't thought about it, but I must be close to a year, too.
Such fantastic people, here, I agree.

Happy blogiversary Laurie! OMG I use Google Maps and Yahoo Maps to get me all over the place else I'd wind up in who knows where when I travel, too. Can't wait to hear the rest of the story!

Gina, thank you, it's been great meeting you as well.

Gawpo, there were absolutely NO intoxicants involved. It sounds as if you took quite the detour. Do you suppose we are related?

Ur-spo, thank you! I have had so much fun getting to know all of you...

Thomas, um, er, well, we had mapquested and yahoo mapped. We are just inept in that department!

Pam, it seems to be a real trend with me, especially down here in the big city! Happy almost Blogversary to you too!

Naturewoman, we really had done all of those things, plus had driven the route many times. I'm a terrible navigator and Cousin Kay is just as bad.

I'm always late but worth the wait. Happy Bloggerversary! I hope we both make it another year!

Butterly, I hope we do too! As long as I don't get run over by a truck here in the big city, I think I'll be ok.

And you are definitely worth the wait!

I am contacting you because I am working with the authors of a book about blogs, and I'd like to request permission to use the photograph you have posted in this book. Please contact me at mattvid07@gmail.com, and I'd be happy to give you more information about the project. Please paste a link to your blog in the subject field. Your assistance is greatly appreciated.